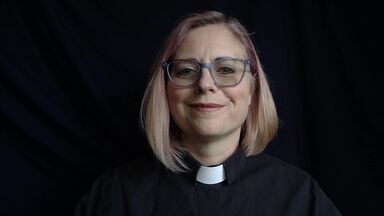 The Very Rev. Laurie A. Lewis
Born in Denver and raised in Wichita, I graduated from Goddard High School in 1993.  After attending the University of Kansas for one year, I realized I needed to work full-time while attending college, and I transferred to Wichita State University.  Over the next four years, I worked for Koch Industries, WSU Human Resources, and finally WSU University Computing before graduating in 1998 with a Bachelor of Business Administration degree, Majoring in Marketing and Minoring in Management.  After graduation, I continued working in University Computing as a Cobol programmer through Y2K, eventually becoming a web programmer and software trainer for university staff and faculty.
In 1999, while getting certified as a SCUBA diver, I met Tom.  This relationship, between an Evangelical Protestant and a Roman Catholic brought the us to The Episcopal Church.  Tom and I were married at St. James Episcopal Church, Wichita, in August 2000. In 2005, we packed up our family that included 3-month-old TJ and two dogs and moved to seminary.  I graduated from VTS in May 2008, and I was ordained to the priesthood in December 2008.
In my ordained life, I served one year as a curate at Trinity, El Dorado.  Then I served four years as Associate Rector at St. Stephen’s, Wichita.  I accepted the call to be Priest-in-charge at Grace, Winfield, and Trinity, ArkCity, in 2013.  They then called me to stay as Rector in 2015.  Being called now to return to St. Stephen’s as Rector, is an honor.
I served seven years on the Council of Trustees for the Episcopal Diocese of Kansas and am also the nominations chair for Diocesan Convention.  I am Dean of the Southwest Convocation of the Diocese and am privileged to be a deputy to General Convention of The Episcopal Church in 2022.  All these greater church roles are part of my ordination vows to take part in the councils of the Church.  Beyond that vow, however, these roles fire me up and fuel me for visioning with the local parish.  I chose The Episcopal Church as my practice of Christian faith, and I hold dear the structure of local, state, national and global connection that is part of this church.
Tom and I have lived in the same house since returning from seminary in 2008.  Tom is an electrician and loves being a part of the Young Electric, Inc. family.  Our oldest son TJ is a sophomore at The Independent School, and our youngest, Alexander is a 5th year student at Wichita Montessori School.  Our family includes two dogs and one cat: Carlee Simon (6-year-old Hound-Akita mix), Carmen Sandiego (4-year-old German Shepherd), and Oreo Ignatius (9-year-old tuxedo cat).  Our hobbies include bicycling, beekeeping, and the rare SCUBA diving adventure.
My last Sunday with Grace and Trinity will be March 14th.  I will then take a couple of weeks off and will begin in the office at St. Stephen’s on April 5th.  Until then, may we all pray the vision of God for our journey will be made clear and the path opened before us.

Ever living God, whose will it is that all should come to you through your Son Jesus Christ: Inspire our witness to him, that all may know the power of his forgiveness and the hope of his resurrection; who lives and reigns with you and the Holy Spirit, one God, now and forever. Amen.

​In the peace of Christ,
~Mother Laurie
​

Guests Start Here
What to expect on Sunday

What does Episcopalian mean?

Can I receive Communion?

Who is the Priest?

Who is St. Stephen?