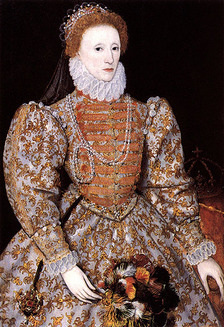 Elizabeth decided it would be both. The great Elizabethan Settlement was symbolized by the language used when Communion is administered, “The Body of our Lord Jesus Christ, which was given for thee, preserve thy body and soul unto everlasting life.  Take and eat this in remembrance that Christ died for thee, and feed on him in thy heart by faith, with Thanksgiving.” This sentence contained the important elements of both Catholic and Protestant eucharistic doctrines. It declared both doctrines to be correct, which most thought to have irreconciable differences. She helped navigate the “via media”, or the middle way, that the church has since attempted to follow.  The “via media” strives for theological comprehensiveness rather than political compromise.

During the 17th century, a golden age of Anglican theological writing emerged, led by "the caroline divines" such as Lancelot Andrewes, Thomas Ken, Archbishop William Laud, and Jeremy Taylor. They contributed greatly to a positive view of the "via media" of the Anglican way, an approach to Christianity that drew on Scripture, the ancient teachings of the church fathers, the worship life of the church, and the Incarnation of Our Lord. You can read some of their writings here. 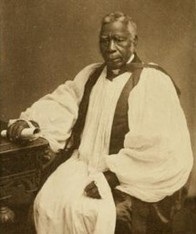 Bishop Samuel Ajayi Crowther
The English Church followed the growth of the Empire.  It sometimes followed the flag, and other times explored ahead of it. The Church of England was the established church in England and Wales, but not in Scotland. After the Revolutionary War, Anglicans in America (now called Episcopalians) turned to the Episcopal Church in Scotland for the continuity of its line of bishops. As the church grew outside of England proper and independence movements began, the church had to figure out how it would govern itself without the help of a national parliament.

This gave rise in the 1860s to the Lambeth Conference. The conference was established to give mutual support to fellow bishops, and to learn about the different problems that existed through this worldwide church.

World-wide Communion
he map shows countries where Anglican churches are present. The bits in green and red contain churches that are in full communion relationships with the Anglican Communion. In all, there are 38 separate Anglican churches, or "provinces", plus 5 more that are under the direct oversight of Canterbury.

A complete list of the provinces, and the countries where Anglicans can be found, is here.

Anglicans in the age of Empire could base their self-identity on a shared experience of "Britishness". By the end of the 19th century, it became clear that shared heritage would not be enough. Especially since Anglicans were at the cutting edge of conversations with other churches, we needed to be able to explain what made Anglicans distinct or different whether they were Episcopalians in the United States or Anglicans in Uganda. The bishops created the Chicago-Lambeth Quadrilateral, which is as follows:
The Anglican Communion has always been a wonderful experiment in Christian ecclesiology. Hooker and the other Anglican theologian wrote persuasively that the early church favored a councilor model of administration with one bishop having no more importance in the eyes of God than another bishop. While recent events have strained this relationship, worldwide, the church and its Communion is still growing.